As 2011 comes to an end we like to remember the year’s successes and look back at past achievements. This was a big year for the Driving Equality project. We hired an incredible editor, worked with an amazing musician to compose an original soundtrack for the film, and collaborated with a very talented graphic designer to create popping titles. Because of all their hard work, and support from people like you, the Driving Equality film is close to being finished!

As we look back at this past year’s accomplishments, we also think about the past achievements of the Driving Equality project.

Remember when we confronted the man in the parking lot who was gathering signatures for the anti-gay ballot initiative in Washington state? He was lying to voters to get more signatures. That video was reviewed by Washington legislators! (VIDEO)

Remember when we sat down with Shirley Phelps of the “God Hates Fags” Westboro Baptist Church. We spent four hours in her home while she told us that God hated us and wanted us to die. (VIDEO)

Remember when we interviewed Dan Nicoletta, Harvey Milk’s friend and camera shop employee. He told us the story of how he found out about Harvey’s assassination. (VIDEO)

Remember when we sat down for a conversation with Sam Brinton, the young man who was forced through ex-gay aversion therapy. He told us what it was like to be electrocuted for being gay. (VIDEO)

The Driving Equality project collected all of these stories and we will share them with you in the film.

This is a quick overview of the The Driving Equality Project:

States Reached: 48 (Will Alaska and Hawaii will be next?!)

Part One of The Driving Equality Project was a huge success. We reached, and then surpassed our goals on every account. The conversations we had and interviews we conducted in almost every part of the country have given me a much greater understanding of the daily lives of LGBTQ people in America and the work that needs to be done to ensure full equality for all.

Now on to Part Two: Sharing these stories with you in a documentary film!

I made it home safe and sound today. It feels good to be back in Cambridge. I am thinking about what my next steps will be. It will take some time to process the trip and adjust to being home.

You can help out the Driving Equality project by donating to the New Computer Fund. I need to raise $1700 more to purchase the computer. This computer will be used to edit the final documentary.

I am on the home stretch today, driving from Buffalo, New York to central Massachusetts. I will spend the night at my parent’s house in Lunenburg, Massachusetts, before completing the journey and returning home to Cambridge, the city I started in 106 days ago. It is hard to believe that I’m almost home after over three months on the road.

My trip is almost over. I drove to Buffalo, New York last night, and then decided to cross the border in Canada. The Canadian border guard asked me what I was doing with the film equipment. I told him that I was making a documentary about gay rights in the United States. He asked, “for or against?”

I told him, “for.” He smiled approvingly, but sent me to have the van search in “secondary.” Readers of this blog will know that this is the sixth time the van has been searched. I have made it very clear that I strongly oppose illegal searches of my vehicle. I should also note that I am more than happy to comply with legal searches, such as this one at the national border. During the search of the van, I had to go in and speak with a woman from Customs. She asked what I was doing. I told her that I am driving around the US making a documentary about gay rights. She replied, “You know it’s legal here!”

Realizing that she was referring to same-sex marriage, I responded with my typical, “yah! That’s awesome!. She was excited and proud of her country. It was awesome.

I hung out in Niagara Falls today and performed my duties as a tourist to the best of my ability. This place is pretty incredible. 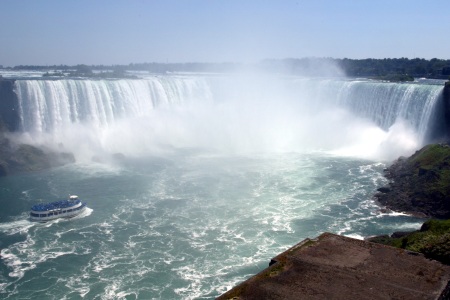 I was in Cleveland, Ohio today at the Lesbian, Gay, Bisexual, Transgender Community Center of Greater Cleveland. I had the pleasure to meet with Sue Doerfer, the Director of the Center. We talked about what it is like to be LGBT in Ohio, the need for a Center, and the city of Cleveland. Ohio does not have any legal protections for LGBT folks, but the city of Cleveland is trying to make up for that. The city just created a Domestic Partnership registry. Couples can register as partners, making their relationships official in the eyes of the city. However, because the state and federal governments do not recognize the Domestic Partnerships, no legal rights are gained.

I was quite impressed with the work going on at the Center. While I was there, a bunch of young people came in to use computers and relax in the safe environment. I wish every city, large and small, had an LGBT community center.