We are back with a new name. Phelps-A-Thons are now Love-A-Thons! We are now working on Love-A-Thons all across the country on the new website: http://www.Love-A-Thon.com.

If Fred Phelps and the Westboro Baptist Church are coming to your area (check their picket schedule online), let me know and I will add a Love-A-Thon for your community. We can work together to raise money for your local gay/straight alliance, LGBT community center, or whatever organization you chose. Contact me here.

The December 12th Boston Phelps-A-Thon was a huge success! We raised over $4,500 for Driving Equality! We collected $755 of that during the 45 minutes we were on the street counter-protesting the Phelps clan. Seventy-five people showed up to support the Phelps-A-Thon and to say no to hate. Everyone cheered as we updated the sign every five minutes, tallying the amount raised by the Phelps-A-Thon. People walking by handed us $5, $10, $20 bills. Someone wrote a check for $250 on the spot. It was incredible!

Congratulations to everyone that made the Phelps-A-Thon a success! We collected donations from over 100 people all over the country. A few days ago I received a letter from a woman in a small town in Montana. She thanked me for turning Phelps’ message of hate into one of positive change for LGBT people. She included a check for $10 as a contribution to the Phelps-A-Thon.

It is not too late to make a contribution to the Phelps-A-Thon. I am sending Fred “God Hates Fags” Phelps a card, telling him how much he raised for LGBT equality. Make a donation today and your amount will be included on that card.

at the Boston Center for the Arts. Fred Phelps and his group travel all across the United States spreading their message of hate. When the group comes to Boston, however, they will be helping to drive equality across America.

Driving Equality is hosting a Phelps-A-Thon to counter Fred Phelps’ hateful message. For every minute the “God Hates Fags” clan is protesting, we will be collecting donations for Driving Equality, a 85-day trek across America to all of the lower 48 states to advance LGBT equality. (Pledge Online)

The Phelps clan will be protesting in front of the Boston Center for the Arts Black Box Theatre from 7:15 PM to 8:00 PM on December 12th. You can pledge any amount you chose, whether it be $0.25, $1, $2, or even $5 for every minute they protest. You can even pledge a flat rate for the entire time the group will be demonstrating. (Pledge Online)
The point of this Phelps-A-Thon is two fold. First, we are using Phelps’ own hateful message to raise funds for a good cause, one that will help counter the lies that are being spread about LGBT people. Second, we will be displaying a sign in front of the “God Hates Fags” clan tallying how much money they have helped raise for LGBT equality. This will certainly upset the group and it is possible that they will leave early to stop our fundraising. 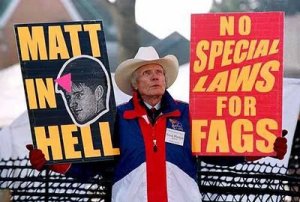 On the “God Hates Fags” website, Phelps has this to say about the upcoming protest in Boston:
BCA Black Box Theatre – God Sent Matt 2 Hell! 527-551 Tremont Street. Matt is in Hell! Deal with it. Just read Romans 1, and see him and you in those words, and finally this: Romans 1:32 Who knowing the judgment of God, that they which commit such things are worthy of death, not only do the same, but have in them that do them. AMEN!

We can turn these hateful words into positive change. Help Drive Equality Across America.

Driving Equality is a trek across America to raise awareness of the various forms of discrimination faced by LGBT people in each state of the nation. Highlighting the differences in rights, laws, and amendments between the states will shed light on the current social standing of queer individuals today. I hope to create a dialogue about the disparities across the nation, and what can be done to end discrimination for all.

During the summer of 2009, I will be going on an 85-day, 15,000-mile road-trip, through all lower 48 states, to advance LGBT equality. Check out the About page to find out more about the project.
Explore the website! Find out more about me, take a look at my route, learn about the trip’s net-zero environmental impact, and consider donating or becoming a sponsor. When the trip starts, I will be updating the site on a daily basis with blog posts, photos, and videos.
If you are interested in learning more, or being a part of the project, send me an email at Chris@DrivingEquality.com.