The Phelps-A-Thon was a huge success! We raised over $4,500 for Driving Equality! We collected $755 of that during the 45 minutes we were on the street counter-protesting the Phelps clan. Seventy-five people showed up to support the Phelps-A-Thon and to say no to hate. Everyone cheered as we updated the sign every five minutes, tallying the amount raised by the Phelps-A-Thon. People walking by handed us $5, $10, $20 bills. Someone wrote a check for $250 on the spot. It was incredible!

Congratulations to everyone that made the Phelps-A-Thon a success! We collected donations from over 100 people all over the country. A few days ago I received a letter from a woman in a small town in Montana. She thanked me for turning Phelps’ message of hate into one of positive change for LGBT people. She included a check for $10 as a contribution to the Phelps-A-Thon.

It is not too late to make a contribution to the Phelps-A-Thon. I am sending Fred “God Hates Fags” Phelps a card, telling him how much he raised for LGBT equality. Make a donation today and your amount will be included on that card. 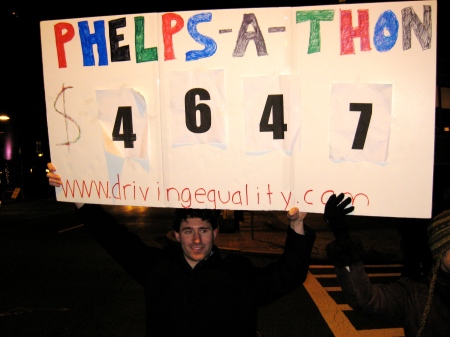 This entry was posted on Saturday, December 13th, 2008 at 3:10 am and is filed under Uncategorized. You can follow any responses to this entry through the RSS 2.0 feed. Responses are currently closed, but you can trackback from your own site.